In Part I of my Liveaboard Life series, I shared how refreshing it is to not have stuff from my past weighing me down, as well as how living with what I only love and need in my beloved sailboat supports me in living by my values. In this post, I´m going to dive deeper (pun intended) into a life lesson I’ve learned by striving to live clutter-free, and now living as a minimalist. That lesson is: choose to not live from a fear-based mindset, but rather an abundance-based mindset.

Have you ever had the urge to just throw away all those toiletries you’ve accumulated, saving them on the pretense that you’ll need them in the future? I´m talking about mini-bottles of this and that, that lotion you use in the summer but it’s winter right now, or the bottle of green nail polish you’ve held onto for… has it really been a decade?! Then perhaps, after a moment of analysis, you talk yourself out of it, reconfirming the reasons why you may need them in the future.

I don´t think I was alone in this habit. I see the evidence in practically everyone’s shower or bathroom closet. We all learn how to consume in this day and age, but do we learn how to let go? Can you have a life of balance with one and not the other?

So, what is going on exactly when we talk ourselves out of following our urge to purge? Part of it is the legacy of stashing that baby boomers inherited from their depression-era parents. My generation still inherited this watered-down version from our parents. The other part of it, that I’ve learned from studying and practicing clutter-clearing for over a decade, is that holding on to all those ¨somedays¨, backups, and ¨just in case’s¨ was simply me acting from a mindset based in fear – fear of not having enough, fear of not having what I need when I need it, of how I may appear to others if I don’t have it.

Inspired by clutter-clearing figures like Karen Kingston and Marie Kondo, I started the practice of making decisions from the mindset of abundance, instead of scarcity or fear. I have practiced trusting that there will always be enough when I need it, and I don’t need to be afraid of letting things go. If for some reason, I need green nail polish again in the future, I can go and buy it. And hey, it will be fresher polish and a better shade of green the next time around. A month ago, my partner gave me a gift of specialty soaps from a trip, and I started using them right away instead of just storing them or displaying them. Each of the five little soaps had a unique and lovely scent, making my shower a special treat for the next five weeks, supporting my experience of an abundant life.

Consciously choosing what I keep, use, and let go, with a mindset of abundance instead of scarcity, has led me to living with even less, on the water. It did not lead me to missing all my stuff and wanting it back. Now I live with less stuff, less fear, and less worry. I enjoy the natural, healthy ebb and flow of things in and out of my life. 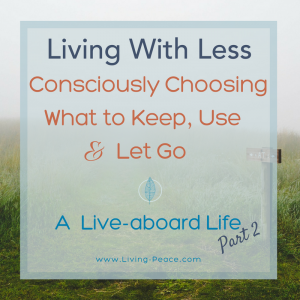 1 comment on “Living with Less… Consciously Choosing What to Keep, Use & Let Go: A Liveaboard Life – Part 2”