Recently, I helped my mother with a good-sized decluttering project.  We had 2 goals…

First, go through the family photos and organize them, and secondly, Declutter the basement and mom’s clothes for a springtime town-wide yard sale.

We discussed the possibility that the yard sale might not bring in a lot of money (not to mention the amount of work to set it up etc.). As it turned out, she did recoup her setup/fee from it, and the rest was picked up by Big Brothers Big Sisters (15 boxes and 8 bags of clothes!), so it’s all out of the house now and helping a good cause.

The project did bring us closer together and allowed us to spend good chunks of time together over 5 months!  I am very proud of my mom, and organizing a family member is not the easiest thing to do, but she was a trooper.

This is her story, in her own words…

Starting several months into the New Year my daughter Melissa and I undertook a huge project of cleaning out my condo.

We started with all the photos scattered in the basement, loft area, and others that were just “around”.  We went through each and every photo, many of them several times because there were plenty of duplicates.  It was a project of love, bringing up old memories, talking, sharing lunch or snack or dinner each time, bringing us closer to one another each session.  It was a roller coaster of emotions, and she always encouraged me to talk about my feelings, ideas, whatever came into my head.  Boy o’ boy did things come into my head.  We both took time to process it and it helped me move on to the next group of photos.

The tears and joy of the endeavor were those of healing, laughter, growth and overall contentment for me when we finished that project.  But that was the beginning of the journey for me as with her continued help over several months we took on the project of cleaning out the basement for a town wide yard sale on May 21st.  I wouldn’t classify myself as a hoarder, although I do like to have things around me, so this, too, was a journey of challenge but with her help we plodded through the basement from one end to the other.  We’d discuss the price we thought would bring people to purchase my gently used (and sometimes brand new) items, filled box after box, and moved them to the garage until the yard sale.

As I’ve gotten older, age 65 right now with 66 creeping slowly {or NOT so slowly} upon me, I’d made a decision that I didn’t want my family to go through what my family went through when a loved one is lost.  I developed a mindset that my entertaining years were pretty much over, and all the memories I’d made using the things I was now getting ready to let go of would always be there.  Piece by piece the shelves got emptied with very few items going back on them, I was ready to do this.

I understand how people get “attached” to things, we all do it to one degree or another, and it was now time to undo that mindset and move forward.  I didn’t realize how much the items were weighing me down mentally, and as they made their way to the garage, the pounds felt as if they were dropping off me, too.  I began to realize how so much “stuff” added to my depression, also.  It took a lot of the time and was overwhelming to deal with.  But with her organizing skills, emotional and physical support, I got through it.

Did I mention the DVD’s and CD’s?  Hmm, guess it’s time for that.  My ex-spouse (well, we’ll be divorced in 2017) was a collector of both.  He’s a bass trombone player, and likes his music.  I’m a lover of music, so we accumulated a lot of CD’s.  Several hundreds of CD’s.  I went through shelf after shelf of them, separating them to his music and mine, boxing them up for him to take.  I think I’ve got about a hundred CD’S, but I’m always listening to them in my car.  Don’t like the radio stations these days, refuse to pay for them online to post to my phone only, so I’ll go through them again and get rid of the duplicates (yep, again buying things and not knowing you already have them scenario).

DVD’s, oh my God, hundreds of them; and guessing 35-50 VHS tapes.  He and I went through each and every one of them, not sure how many he took, but it’s well over a hundred I’d guess.  I picked out about 25 DVD’s, mainly chick flicks and a few action adventures.  My wonderful grandson came over and helped me box up all the other DVD’s and he took a large box home to keep (oops, guess the cat’s out of the bag on this one).  Some were for him, his sister, his two step-brothers, all of which he carefully picked through.  There were still I’d guess another 100, some of which sold at the yard sale, and the rest donated to the local town library which was very happy to receive them.  I didn’t subject Melissa to this project, because I wasn’t attached to many of the movies so it was easier to let go of.

Then the biggest battle was my clothing.  Uh-huh, clothes.  In the basement, in my bedroom, in the upstairs bedroom, in closets, drawers, on hanging garment racks.  It was my biggest battle because each piece of clothing dating back to the time when I was a young girl.  Being raised with four brothers, three who were older, often brought me hand me downs.  Common for the 1950’s, not so much today.  I was luckier than most because my Mom’s brother, my Uncle Nick, had two older daughters, and I was the lucky recipient of their hand me downs, too, so I had girly clothes to wear once in a while.  Life was good.

But as I grew older, into my teenage years, there were no hand me downs, and money was tight, and I didn’t have much in the way of clothing.  I learned to sew in high school and made a lot of my clothes, not that there was a lot, but they were mine.  So, I’ve drug this lack of clothing throughout my lifetime, buying more and never getting rid of any.  For decades.  I had a lot of clothes.  Not fancy, just t-shirts and pants, some nice dresses for special occasions, but a lot!

Melissa had me sit comfortably on my sofa downstairs, and we went through every single item of clothing on those hangers.  One at a time, at my own pace, and looking back realizing I was processing each article of clothing from a little girl’s standpoint to the woman I am today.  Wow, it was emotionally challenging.  Yet as I decided if it was a keeper, a donation, a maybe or a try-on, I could feel the weight of each piece coming off of me, making me lighter and lighter.  Some items I agonized over, some I knew were time to let go of, and others were just plain overwhelming to see all in one place.

We did the same thing with my bedroom closet.  I sat on the bed, she would hold up an item of clothing, and the decision process began all over again.  And as it did the first time, each decision was mine to make, and I made them, piece by piece.  When we were done, I was surprised that I didn’t anguish more over things I’d held onto for so long.  When the piles were made, there were about a dozen maybes which all became donates.  And the try on ones, about the same, and I only kept two.  I still have a lot of clothes left, but they’re more than manageable, they all fit me, and I know what I have.  I had three of one shirt that I’d bought over the course of probably two years, and I kept all three.  I asked myself why I felt I needed to do that, and it was because I love it so much, I know I’ll wear it out and still have a new one to wear.  But that’s the only piece of clothing like that.  Hey, I’m human, and it’s what works for me.  Me and those three tops.

We went through a bunch of the Christmas stuff, and I did get rid of some of that.  I still have all my ornaments to go through, but I have the summer to do that.  I can sit with each one, remembering happy times, and pass them along hopefully to someone else who will make their own memories with them.  That’s a project I don’t want to rush through, as Christmas is my favorite holiday.  Always has been, always will be.

I didn’t sell much at the yard sale; people were browsing but not buying much.  But that’s ok, it was a beautiful day, chatted with a lot of nice people, spent the day with a few friends and my dog, life was good. 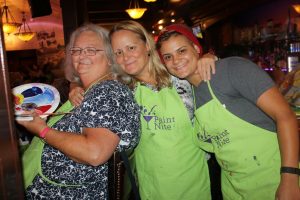 So, it’s been an incredible journey for myself, and my daughter, who so lovingly gave of her time, energy, patience and love.  We’ve grown a little closer, and I always thank God for that, for without family, what is there?  I now enjoy going down to my basement, sitting on the sofa or love seat and looking around (it’s decorated for Christmas 365 days a year).  It’s cooler in the basement in the summertime so I know I’ll enjoy going through the ornaments.  Who knows, maybe she’ll want to help me do that, too, just for more time to spend together.

I wish everyone could have the opportunity to do what she and I did together.  I feel cleansed, uplifted, my depression is lessened, and hope I made a lot of others happy along the way who will use my “stuff”. Thanks, Melissa, I love you! 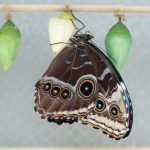 1 comment on “A Story of Letting Go: Beginning a New Chapter in Life”