I constructed Intro Metro shelving for the first time with a client last week.  Assembly was relatively straitforward but did require a minimum of two people.  I had heard horror stories of how difficult these shelves were to assemble, and was dreading this part.  Maybe the pieces have changed in the past few years, or maybe it is deconstruction that is so difficult!  All in all it wasn’t so bad.

I recommeded this shelving to my client for use in her dining room that doubles as a home office space.  There was a strong need for storage and space was limited.  Thankfully, my client’s home has high ceilings, so I recommended going verticle.  I suggested the Metro shelving because they would allow four levels of storage, and the piece is versitile enough to be used for the office supplies, kitchen supplies, and general storage if need be.  The open design allows for a piece that is less intrusive than a bookshelf.

We then used clear storage containers to store the smaller office supplies including; markers, pens, paper and glue.  The containers were finished with labels identifying the contents.

I would use this shelving again.  I love the versatility of it and how easy it was to construct (now that I have done it myself!). 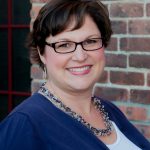